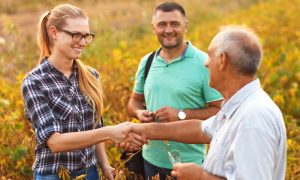 In agriculture, relationships are vital and a person’s word is their promise. That’s why the oral lease or handshake deal is still common between producers and owners. Most handshake deals are uneventful, but unexpected events and soured relationships can leave both parties vulnerable to financial risk.

As an ag lender who’s built deep and trusting relationships with producers, checking in on your client’s handshake deal may not be a bad conversation starter. It can open the door to a discussion on what they’re gaining from this agreement and what’s at risk, so they can decide what’s best for their operation. It’s one way you can highlight your expertise of the local ag economy.

According to a 2019 report by the USDA*, only 8.1% of U.S. farms use contracts for production leases or marketing leases. Legally, handshake agreements are just as legally binding as a signed contract.

And the advantages of the verbal agreement are many. They’re ideal for arrangements that are simple and require flexibility. Getting the deal done over a friendly nod and handshake conveys a deep trust in the other person, a sense they’re in this together and won’t let the other down.

Verbal agreements over business matters when large sums of money are at stake can put either party at financial risk. It’s worth asking what happens if the unexpected happens like a death or a major weather event?

That’s where handshake agreements get thorny. Each party has their livelihood at stake. There’s also the human tendency to make assumptions and our memories may be faulty. Even if the two parties had a comprehensive discussion and feel their concerns were heard and met, failing to capture it in writing can backfire. In the middle of a crisis, both sides can find themselves in a deep disagreement on what they did or didn’t agree to.

Though handshake leases are legally binding, the client can be left with no legal recourse when the particulars aren’t captured in writing. That can lead to a serious setback in that producer’s enterprise when they could have been protected by a legal lease.

When discussing verbal agreements with clients, the following considerations can guide your conversation.

Uncomfortable conversations are a necessity

Handshake deals are deep in the fabric of ag culture. Acknowledge and understand that asking the other person to seek a professional to draw up an agreement can be an uncomfortable conversation for them. But it’s also useful to point out the alternative. What’s the cost of avoiding that uncomfortable conversation? Trying to salvage one’s interests in the middle of a crisis, or a time when emotions are running high, and there’s nothing in writing for backup — that situation is by far more uncomfortable.

When in doubt, an ag attorney and other ag experts can provide the guidance your client needs to understand their options so they can protect themselves financially. Many state extension services provide guidance and help for ag producers.

Understanding state laws around handshake agreements can be an important first step for producers who want a deeper understanding of what’s at stake. For example, some states mandate that leases lasting longer than a year must be put into writing. Again, this is where a local ag attorney and ag organizations provide guidance.

An experienced ag attorney can help your client become aware of worst case scenarios, as well as less obvious issues they might want to include in the contract. These agreements also spell out what they’re entitled to. That’s where written agreements provide protection and guide next steps.

Bottom line, even if your client is leasing from family friends or a family member, a written agreement gives producers and owners a chance to discuss tough issues before they happen. Knowing what to expect and what was agreed on ahead of time, and committing it to writing, can save the relationship and protect the livelihood.

When seeking solutions to help finance your clients’ agricultural loans, we’re ready. Simply reach out to a relationship manager anytime to get started.