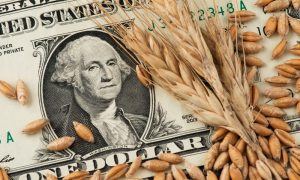 Much like the American Midwest, Ukraine and Russia have long been an international breadbasket. In a normal year, producers from these two countries are responsible for around 28% of global wheat exports, roughly 14% more than the United States.

Now, war is raging in Ukraine, causing widespread devastation and undermining producers. Meanwhile, Russia’s actions have led to their exports becoming mired in sanctions and international divestment of business ties to the country. The consequences have been swift, spiking wheat futures by nearly $4/bushel to $12.50 on March 7. They’ve only come down partially in subsequent weeks, staying around the $11.00 mark.

Amid the turmoil and tragedy of war, U.S. producers are under higher pressure than ever before. Unfortunately, the market’s also never been harder to read.

Across the United States, winter wheat crop condition scores had a difficult start to 2022. A good harvest in key states such as Kansas is currently far from certain. If the harvest struggles, it would be the second poor year in a row.

To make matters more difficult, many producers have already been striving to trim inputs where they can, as a result of rising fertilizer and diesel costs. Now that Russia and Belarus (major global exporters of potash) are sanctioned, these costs are only set to climb higher.

A market difficult to predict

The sky-high values of wheat are currently having an effect on farmers, preventing them from selling upcoming harvests entirely. Buyers all along the supply chain, such as local co-ops, grain elevators, flour millers, and exporters have stopped buying over fears they would be unable to re-sell at a profit.

Many of these mid-chain entities are hoping to get a better understanding of how the war will progress before they make any decisions. However, at this stage, even experts are unable to make any reliable predictions about the near or distant future for the region. Meanwhile, some farmers are sorely in need of cash to prepare for spring planting.

Looking at the long term

While it’s hard to know for certain what the future holds for U.S. farmers, there are a couple of scenarios that seem likely to experts.

The first is that wheat prices will remain high, but farmers will struggle to find a profit even once buying picks back up. The costs for fertilizer and fuel, coupled with rising inflation, could be too high to overcome.

The second possibility is more optimistic, where the high prices will outstrip high input costs enough to generate a profit. Still, even farmers who are banking on this scenario and increasing the number of acres they plan to sow with wheat, speak of caution.

As for 2023 and beyond, some believe the global market will shift to more affordable grains and wheat substitutes in response to this year’s price spike. The effect from such a shift away from wheat, could be felt for years to come.

Making up for lost wheat acres

In the end, all these scenarios come up with a Ukraine-shaped hole in the supply chain. As one of the world’s largest wheat producers, their output isn’t something United States farmers can quickly make up on their own.

These continue to be unprecedented times. As ag producers continue to adapt their operations to meet challenges, know you always have a partner in Agri-Access.